Determine blood type is essential before administering a blood transfusion, including in an emergency. Currently, these tests are performed manually by technicians, which can lead to human errors. Various systems have been developed to automate these tests, but none can perform the analysis in time for emergencies. This work aims to develop an automatic system to perform these tests in a short period, adapting to emergencies. To do so, it uses the slide test and image processing techniques using the Raspberry Pi. The image captured after the slide test is processed and detects the occurrence of agglutination. Next, the classification algorithm determines the blood type in the analysis. Finally, all the information is stored in a database. Thus, the system allows determining the blood type in emergencies very fastly.

Determining blood types is very important during an emergency before administering a blood transfusion. Presently, these tests are performed manually by technicians, which can lead to human errors. Determination of the blood types in a short period and without human errors is very much essential. This paper presents a new methodology for determining blood group by taking an image of blood sample content added chemicals such as Anitclonal A, B, D and by processing this image in raspberry pi 3 we can get the blood group. Phenotyping based on Raspberry pi and python 3.5 for detection of blood group using image processing. The image processing techniques such as thresholding and morphological operations are used for the basic operation of the images. By using the standalone system based on the raspberry pi we can easily take the image of the blood sample process it and the result will be shown on the LCD. Depending on the agglutination rate we can classify the blood group. Thus, the developed automated method determines the blood type using image processing techniques. The developed method is useful in an emergency and also used when several people are large.

Before performing a blood transfusion, it is necessary to perform certain tests that are properly standardized. One of these tests is the determination of blood type and this test is essential for the realization of a safe blood transfusion, to administer a blood type that is compatible with the type of receiver. However, there are certain emergencies which due to the risk of a patient's life, it is necessary to administer blood immediately. In these cases, as the tests currently available require moving the laboratory, it may not be time enough to determine the blood type and is administered blood type O negative considered universal donor and therefore provides less risk of incompatibility.
However, despite the risk of incompatibilities be less sometimes occur transfusion reactions that cause the death of a patient and it is essential to avoid them, administering blood based on the principle of the universal donor only in emergencies. Thus, the ideal would be to determine the blood type of the patient even in emergencies and administering compatible blood type from the first unit of blood transfusion. Secondly, the pre-transfusion tests are performed manually by a technician's analysis, which sometimes leads to the occurrence of human errors in procedures, reading, and interpreting of results. Since these human errors can translate into fatal consequences for the patient, being one of the most significant causes of fatal blood transfusions is extremely important to automate the procedure of these tests, the reading, and interpretation of the results. 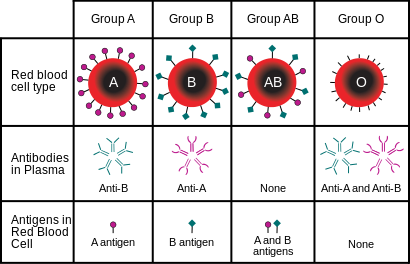 How is it different from competition

Two techniques are widely used for blood group analysis. Among these the most widely used one is the ABO technique. In this antigen A, antigen B and antigen D is used for analyzing the blood group. According to ABO and Rh blood grouping system, the person can belong to any one of the following blood groups: A positive, A Negative, B positive, B negative, AB positive, AB Negative, O positive, O Negative. While doing the blood group analysis by a manual process in laboratories, a drop of antigen is added with a drop of the blood sample and the technician has to wait for few seconds, to check whether the clumping reaction has occurred or not. Based on the level of the reaction occurred, an individual’s blood group can be identified by the technicians.

The blood has been taken and place a five drop of blood on the slide and then add an antigen (A, B & D), Bombay blood group and blood cell. Then the agglutination reaction occurs. After that, the image can be captured by the Raspberry pi camera.

Who are your customers